A blog by the intern Lisa who has done her internship with us from September 2022 till January 2023.

Since my mother was visiting, we decided to take a day excursion to Ayutthaya to get away from the hustle and bustle of Bangkok for a day. Early in the morning, we took a taxi to the Bangkok train station. From here, you can easily take a low-cost local train directly to Ayutthaya. When you arrive in Ayutthaya, you can rent a bicycle on your own or with a guide who can tell you all about the many reunions. After all, we had decided to opt for a car with a private driver for our comfort.

We arrived in Ayutthaya after a car ride of just over an hour. We first stopped at the Wat Lokayasutharam, the Temple of the reclining Buddha. This reclining Buddha is the largest in the island of Ayutthaya and is 42 meters and 8 meters hight. We could light an incense stick here and get a piece of gold leaf to stick on a smaller Buddha. 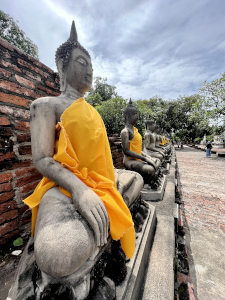 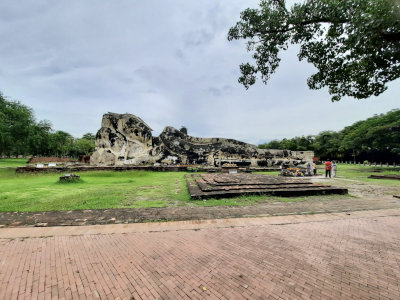 Following this stop, we continued to Ayutthaya’s Historical Park, which is a UNESCO World Heritage Site. Many ruins and temples of the ancient city of Ayutthaya can be found here. The city was founded by King Ramathibodi I, the first king of the kingdom of Ayutthaya.
We started the tour through the historical park. Here we visited 5 different places. Our driver drove us from location to location, allowing us to explore the park on our own and waiting for us at the car until we were ready to go to the next place. 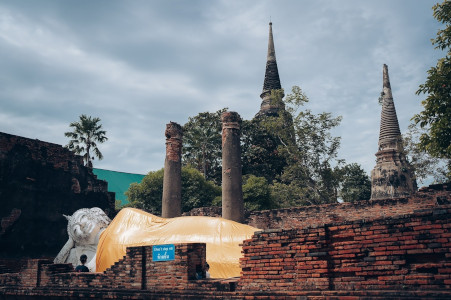 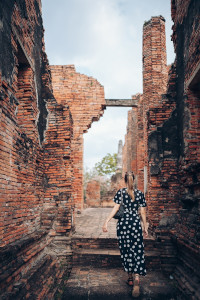 The first temple we visited was Wat Phanan Choeng, which has a 19-meter-high Buddha figure that is especially important to Thais of Chinese descent. The temple was built shortly before Ayutthaya was established as the Kingdom’s capital. There are still a lot of locals visiting the temple, and we couldn’t enter completely because there was a service going on. Right next to the temple you can find the Wat Phra Sri Sanphet, here we saw three large stupas. This Temple served as a model for Bangkok’s Temple of the Emerald Buddha.

The second Temple, Wat Mahathat, “The Temple of the Great Relic,” was one of the most important on the island of Ayutthaya. It encased Buddha relics and served as the seat of the Supreme Patriarch of Buddhism, making it the centre of Buddhism in the Ayutthaya Kingdom.
Wat Ratchaburana, or “Temple of the Royal Restoration,” was the third temple we visited. It is the oldest Temple in the province and one of the royal monasteries constructed during the Ayutthaya period. There are still a lot of exquisite bronze Buddha sculptures and gold artefacts that belong to two princes who died at a young age in this enormous temple.
We finished our journey at Wat Yai Chai Mongkhon, which is still a functioning temple with monks who live in kuti on the grounds. Thai people come to temple to pay their respects not just to Buddha, but also to one of Thailand’s most revered rulers, King Naresuan the Great. 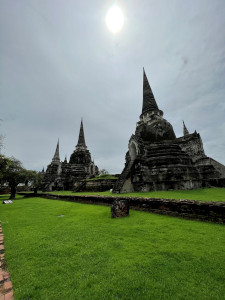 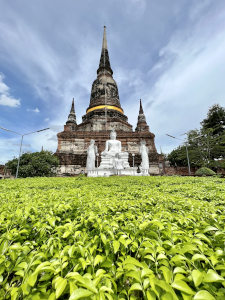 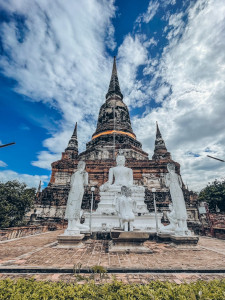 We proceeded our journey back to Bangkok after the tour. The Wat Yai Chai Mongkhon was my personal favourite. This is because you could ascend the stairs of the main bell-shaped chedi and have a great view of the temple complex. I also liked how most of the stone Buddhas wore a saffron sash, which added to the temple’s brightness. Previously, the Buddhas were wrapped in cold, but today they wear saffron-coloured sashes instead.
If you like history and like to take a look in time, a trip to Ayutthaya is definitely worth it! If you want to understand a lot about the history, I recommend visiting under the guidance of a guide who can give you all the ins and outs. There is also an app called “Smart Life” that you can download. With this app, you can aim your camera at one of the ruins and it will show you in 3D how the structure looked before, which is quite cool!

Manage Cookie Consent
To provide the best experiences, Travel Exclusive Asia uses technologies like cookies to store and/or access device information. Consenting to these technologies will allow us to process data such as browsing behavior or unique IDs on this site. Not consenting or withdrawing consent, may adversely affect certain features and functions.
Manage options Manage services Manage vendors Read more about these purposes
View preferences
{title} {title} {title}